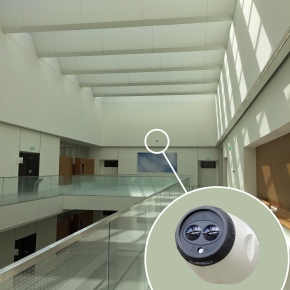 Four Fireray beam smoke detectors from FFE have been installed by SimplexGrinnell at the new Los Angeles Federal Courthouse to ensure optimum fire detection in its large atrium.

A beam of invisible infrared light is transmitted across the building space by the Fireray 5000. The light is then detected by a receiver and measured, allowing it to recognise smoke interference anywhere along the beam path, triggering the alarm signal when the pre-determined threshold is reached.

The ‘low level controller’ feature was a deciding factor in the specification for this application as it means maintenance and testing can be carried out via the control room. Physically accessing the units is expensive and impractical according to SimplexGrinnell’s Construction Manage Sharon Brown.

Another crucial factor was the Fireray 5000’s ‘auto-alignment’ feature, due to the fact that the beams remain aligned during building movement, without causing nuisance alarms or requiring a technician. This was an important factor for a new-build project.

For installers and engineers looking for smoke detection in large open areas, Fireray is the first choice. With its modern design aesthetic and minimal footprint, the Fireray is popular with architects and facilities managers and over half a million optical beam detectors have been installed worldwide.