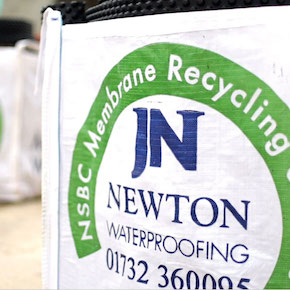 Newton Waterproofing has announced that it saved 5.174 tonnes of plastic from going to landfill in 2019, thanks to its recycling service.

Throughout the course of the year, 223 bags of HDPE membrane were returned to the company as part of the Newton Membrane Recycling Scheme.

By recycling waste plastic into new products instead of manufacturing from new HDPE, during 2019 alone Newton have prevented 5.944 tonnes of CO2e emissions from being released into the atmosphere; the equivalent of burning 1.96 metric tonnes of petrol and saving enough energy to make 826,200 mugs of tea.

Furthermore, since the scheme’s launch in 2017 it has successfully prevented over 13.7 tonnes of plastic from going to landfill, equivalent to preventing 15.746 tonnes of CO2 from entering the atmosphere.

It’s no surprise, then, that the service has won six awards in just over two years, including the ‘Charles Darwin Award’ from the British and Irish Trading Alliance (BITA); the ‘Commitment to the Environment Award’ at the Kent Excellence in Business Awards (KEiBA); the prestigious ‘Innovation of the Year’ award from the National Building Awards; and the ‘Sustainability’ award at the Property Care Association Best Practice Awards.

The closed-loop scheme works in collaboration with the company’s Newton Specialist Basement Contractors (NSBC) who collect waste off-cuts of plastic membrane on their projects.

The waste is then collected by Newton at the same time as making deliveries of new materials, therefore preventing additional emissions from transporting the plastic. Finally, the material is chipped into small granules by Newton, then collected by a national recycler for reprocessing and reusing to make new products for the construction industry.

Newton Waterproofing’s Managing Director Warren Muschialli comments: “Our innovative recycling service had another tremendous year in 2019 and, as well as the environmental benefits, we also saved 223m3 of skip space on site, equivalent to more than 24 full skips and therefore 50 skip journeys. This obviously delivers further emission and cost savings.”