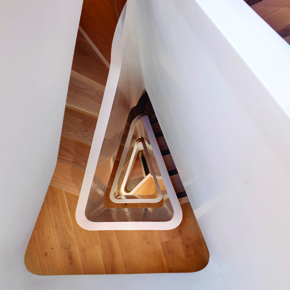 Flatiron house: a staircase with rooms

Flatiron house makes a virtue of a redundant and impractical office building in central London, transforming it into a home described as a staircase with rooms. ABC+D takes a look… 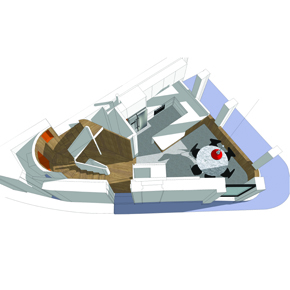 The small triangular footprint of this unusual city centre, two-bedroom house predetermined its seemingly simple spatial arrangement, with one principle room on each of five floors, topped by a roof terrace.

As ever though, the devil is in the detail, and considerable thought has gone into the subtleties of the layout and design at each level to ensure that every space works to its optimum, and that the vertical spatial flow between them, provided by a new signature staircase, feels natural and fluid.

A sinuous white acrylic balustrade reinforces this flow, rising like a twisted and folded ribbon through the five storeys and framing a vertiginous 14m view from glass roof to basement that lends the tiny house an unexpected sense of scale.

The staircase extends up to a new roof terrace, providing the house with rare amenity space in the heart of the West End and making it properly usable as a home. 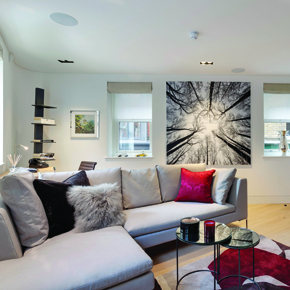 The ugly faceted shopfront has been replaced with a new curved window following the shape of the prow of this flatiron-shaped building above. Within is a curved, perforated white acrylic screen allowing light to animate the interior while maintaining privacy.

The discovery of a 1950’s photograph revealed that the house had once had projecting rendered surrounds to each of the sash windows on the upper floors. The decision was therefore made to reinstate these and to replace the almost flush PVCu windows with dark grey painted timber sliding sash windows which provide satisfying deep reveals, modulating the façade and giving the house more of a presence on the street.

Badly mismatched bricks have been recoloured to better match the originals, without resorting to the costly rebuilding of the façade, retaining the original fabric. Existing, unused chimney stacks have found a new use as duct routes for extract ventilation, soil pipes and a flue for a gas fire, concealed within the original cleaned-up, ornate chimney pots. 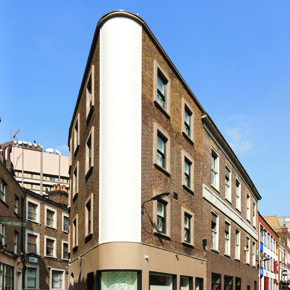 The original damp and dingy vaults under the street have been strengthened, lowered and tanked and now contain a backlit wine cellar off the basement media room, as well as a utility room and store.

Although not a listed building, the house is identified as one of the buildings of merit in the Conservation Area, so demolition and rebuilding would not have been a practical option.

It was previously rather unloved, having lain empty since being used as a builder’s site office for the development of a new store on nearby Oxford Street – but the high-specification refurbishment has given this distinctive flatiron house a new lease of life.

The client commented: “FORMstudio felt from the outset that the solution to the refurbishment rested with the design of the staircase. They designed a brilliant staircase that is like a piece of sculpture. Their attention to detail is fantastic, everything is considered and thought through which makes life from a client’s point of view very reassuring.”

Considerable improvements were made to the existing fabric to reduce energy loss and the demand on the mechanical services systems. Uninsulated solid brick exterior walls and the concrete basement floor were upgraded with high performance PIR insulation internally and new windows fitted throughout. The basement and vaults were fully tanked with a drained cavity membrane system. 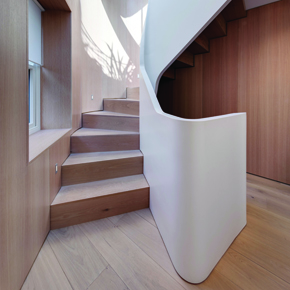 The existing flat roof had minimal insulation and numerous services holes allowed heat to pour out of the top of the building. This was replaced with a new roof with high levels of insulation and airtightness and a glazed extension to allow the staircase to extend up to a roof terrace.

The layout of the building with windows to habitable rooms on two adjacent sides of the triangular plot has resulted in good levels of daylight to the interior.

A Mechanical Ventilation and Heat Recovery system was installed to extract stale air from basement/wet spaces and to supply pre-heated incoming air to the media room. Low-energy LED lighting and controls were provided throughout which also help reduce energy use.