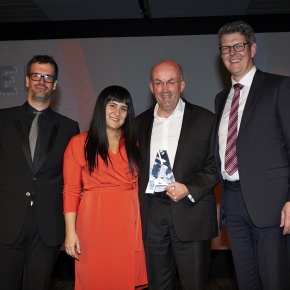 Fletcher Priest has won the BD Office Architect of the Year Award 2017, after demonstrating the strongest body of work in the office category.

In recognition of its contribution to reanimating a neglected City block near St Paul’s Cathedral, One New Ludgate, for Land Securities, was named City Building of the Year in 2016.

Fletcher Priest was announced as the winner at a ceremony at the London ExCel Platinum Suite, during the Ecobuild Conference in March. Ben Adams Architects, Delvendahl Martin, Duggan Morris Architects, Flanagan Lawrence and Lynch Architects were also shortlisted in this category.

Francesca Gernone, a partner at Fletcher Priest, said the company is grateful to GEZE UK for supporting the award, and pleased that the award reaffirms the company’s commitment to creating offices that are effective because people want to spend time in them.

Managing director of GEZE UK, Kaz Spiewakowski described One New Ludgate as an excellent example of how office space can be created into a commercial multi-purpose development with great design impact and enhanced by public space.