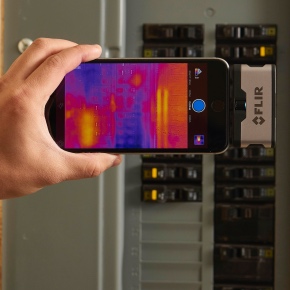 The FLIR ONE is powered by FLIR’s Lepton thermal microcamera core and enables thermal imaging on smartphones. It is the most affordable smartphone thermal camera while the first edition FLIR ONE Pro is the most advanced FLIR ONE to date.

Like the previous generations of FLIR ONE, both new cameras come equipped with a thermal and a high-definition visible camera. Using FLIR’s patented multispectral dynamic imaging (MSX) technology, both FLIR One models emboss high-fidelity, visible-light details onto the thermal imagery to dramatically improve image quality.

The FLIR ONE and FLIR ONE Pro feature a OneFit adjustable connector which enables the connection to be adjusted up to four millimetres to accommodate various smartphone cases without the need to remove the case. They are also smartwatch compatible and a new and improved FLIR ONE app has been introduced. 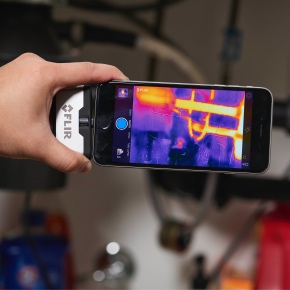 The new FLIR ONE Pro features a distinctive ruffedized design that is drop tested to 1.8 metres. The FLIR ONE Pro is made to withstand work and outdoor environments. Combining FLIR’s MSZ with FLIR’s video signal processing technology, VividIR, the FLIR ONE Pro delivers the highest thermal image quality and clarity of all FLIR ONE generations.

Andy Teich, President and CEO of FLIR Systems, said: “We’ve combined the functionality of previous versions with greater affordability to provide a thermal camera accessory at just $199.99. Meanwhile, we have also created the more powerful FLIR ONE Pro for those who require more functionality and image clarity either at home, at play, or on the jobsite.”