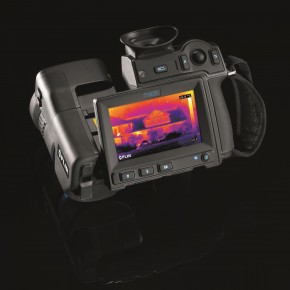 FLIR Systems has announced it will demonstrate its range of FLIR T1K thermal imaging cameras for the first time in the UK at Ecobuild 2016.

The T1K features a 1024 x 768 pixels detector which offers twice the sensitivity of standard uncooled sensors.

This is particularly important in the building industry as it allows smaller targets to be spotted and measured accurately at greater distances.

The thermal camera features OSX Precision HDIR optics allow the accurate temperature measurements to be taken from twice the distance away than industry standard lenses. It also includes a new focusing system which allows continuous autofocus in addition to dynamic manual focus.

The FLIR T1K is one of a range of models available to meet a wide range of application needs and budgets, extending from simple point-and-shoot cameras through to increasingly smart models for detailed analysis.

Also being shown for the first time at Ecobuild is the FLIRMR176 Imaging Moisture Meter Plus. With its built-in thermal imager, this meter shows the source of a water leak or moisture ingress to provide all the measurement capabilities needed to troubleshoot quickly.

Visitors to Ecobuild will have the opportunity to win one of these by visiting stand E3290 at the event, which is set to take place at ExCeL London between the 8th – 10th March.