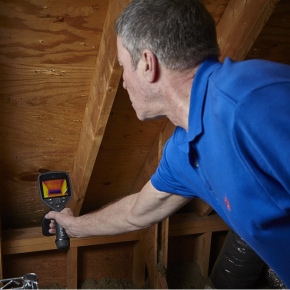 In addition, laser distance measurement features on the new Exx-Series, assuring precise autofocus to improve temperature measurement accuracy, and specifically for the FLIR E85 and E95 models, data for on-screen area measurement in square feet or metres is provided.

Increased thermal detector resolutions are offered on the E85 and E95, up to 464×348 and measure temperatures up to 1,500 degrees Celsius.

The E75, E85 and E95 are also the first Exx cameras offering ULtraMax, FLIR’s embedded, super-resolution process that improves effective resolution by four times – up to 645,888 pixels – and thermal sensitivity by up to 50 percent.

President and CEO at FLIR, Andy Teich, said that the new series of FLIR Exx cameras is a significant achievement with the growing demand for thermal am eras that are compact, capable and easy to use.

The FLIR Exx locates and shows the full extent of construction problems as it is a powerful and non-invasive tool for checking energy efficiency and locating missing insulation, areas of energy loss and moisture build-up.

The FLIR E75, E85, and A95 cameras are now available through established FLIR distribution partners and the FLIR.com store.