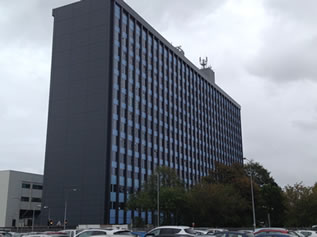 The system was fitted alongside a vapour control layer

New windows were fitted at the 13-storey building, alongside concrete repairs being carried out, exterior walls being resurfaced, as well as the roofing system being installed.

The 1,000sq metre fully built up roofing system was specified by commercial roofing company, Briggs Amasco, due to it being a cold application, allowing for effective sealing and a seamless finish.

The roofing system complies with building regulations and is more efficient in dealing with the issues of heat loss, in turn reducing overall bills for the owners of the building.

Government funding was awarded to The Hull and East Yorkshire NHS Trust to carry out upgrades  Briggs Amasco has used the application system extensively in the past and was certain it was the right solution for the hospital roof.