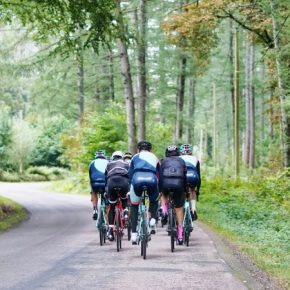 Leading garage door manufacturer Garador has been helping to sponsor Yeovil Town Football Club for years. This year, the company has donated a further £1,500 to assist the club in a major fundraising charity event.

Garador is donating the money to support the Football Club’s new Get Pedalling charity cycle ride. This is for the mental health charity ‘Mind’, in memory of former club captain Lee Collins, who died last year.

The ride, in early May, sees cyclists travelling to every one of Lee Collins’ former clubs, a total of 500 miles in a week, as they visit clubs as far afield as Northampton, Stafford and Tewkesbury.  The riders arrive back at Huish Park, Yeovil, where they will have tickets to watch a game against Borehamwood and will be invited to do a lap of the pitch at half time.

Neil Discombe, Garador’s Managing Director, comments: “This year is also of special significance for Yeovil Town Foot Club as it marks the 20th anniversary of when their team won the FA Trophy competition, an exciting moment for the whole town.

“On top of our normal sponsorship, when we heard about this anniversary plus the new charity campaign in memory of their former captain, we were delighted to offer further one off support. While we are a leading national company, our heart is very much here in Somerset where we have our headquarters and main factory, and doing what we can to support the local community is very important to us.”

The money will go to Mind, which provides advice and support for anyone experiencing a mental health problem.