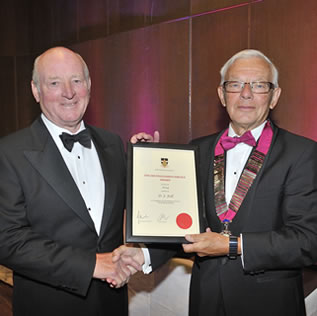 Mr Fell was presented with The Welding Institute’s Distinguished Service Award at King’s College, Cambridge, in appraisal of his service to the course, which has been running annually since 1980.

Members and branches are encouraged to submit nominations for the Distinguished Service Award, which takes place on a national scale to celebrate the contributions to The Welding Institute.

David Fell become a Student Member of The Welding Institute in 1965, was elected as a Member in 1969 and became a Fellow in 1996, in which he dedicated himself to developing safety devices such as Flashback Arrestors.

Mr Fell has primarily focused his time on safety training and has lead the Gas Inspector’s Courses for ESAB since 2004, drafting content and both theoretical and practical training to result in a oxy-fuel gas inspector qualification.