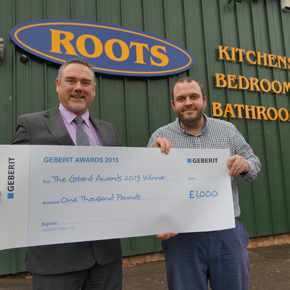 Geberit has announced the winners of its annual awards for 2015, recognising installers and projects that have utilised Geberit products to overcome difficult challenges and achieve quality results.

Robert Hall and his team at Harvey Group M&E collected the award for Best Commercial Installer Team for a project at Queens University Centre for Experimental Medicine in Northern Ireland. The team installed the Geberit Mapress and HDPE pipework at the hospital.

The complex was fully operational in record time and the project went on to win numerous industry awards since its completion last summer.

Darren Meredith and his CGR team was the runner-up in the category for their work on behalf of Hauser Refrigeration, installing Geberit pipework for the refrigeration systems at Lidl supermarkets.

CGR have installed approximately 4,000m of Geberit’s Mapress carbon and stainless pipework so far, with another 50 stores planned.

Seddon Construction picked up third place in the category for its fit out at City Place Chester, a high-end office development which specified 44 Geberit Duofix frame sets.

David Roots of Roots of Faversham was named Best Domestic Installer for his re-design of a family bathroom at a 16th Century property.

The winner of the Best Supply Systems Installer category was Peter Lonton of Green Energy Technology (GET) for the supply and installation of Geberit Mapress copper to a renewable heating project in Northern Ireland featuring eight 99kW wood chip boilers.

Peter explained: “For speed and efficiency we decided to change from traditional compression and solder fitting to use Geberit tools with Geberit Mapress fittings speeding up the whole process, reducing time on site and minimising hot works.”

Iain Thomas of Black Isle Renewables was awarded second place for the use of Geberit Mapress at a training facility at the University of Highlands & Islands, and Kevin Fisk of K Fisk Plumbing and Heating came third for the installation of Geberit Mapress on a heating project for Evohome.

Sophie Jenkins of Dunster Biomass Heating was named as the Best Apprentice. The company commented: “Our apprentice Sophie is by far one of the most unique and capable engineers in the industry. She is always keen to learn something new and is always the one who will stay late to solve the issue rather than leave it for another day.”

Mark Larden, Geberit Managing Director, commented on the Geberit Awards: “The level of competition this year was extremely high and picking out the winners was a very tough task indeed for our expert judging panel.

The awards are designed to recognise quality, excellence and innovation and it is very encouraging to see so much of all three of these important virtues being clearly demonstrated in our industry.”