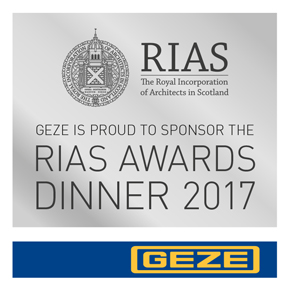 GEZE UK has announced its sponsorship of the upcoming Royal Incorporation of Architects in Scotland (RIAS) Awards Dinner, which is scheduled to take place on Wednesday 14th June, 2017.

The black tie event, which will take place at Murrayfield Stadium in Edingburgh, will see a range of awards presented for architectural innovation and achievement across Scotland.

These include the Historic Environment Scotland award, the Forestry Commission Scotland/Wood for Good award, and the Saint Gobain (Emerging Architect) award. The winners of the RIBA Awards for Scotland will also be announced.

GEZE is delighted to be sponsoring the event for the third consecutive year. The company is dedicated to working closely with architects, helping them to achieve their creative visions by providing door and window control solutions that are compatible with both heritage and contemporary building styles.

Several of the projects on the RIAS’s 27-strong shortlist feature automatic doors from GEZE. The awards shortlist, which was drawn from 84 impressive entries, demonstrates the rising quality of Scottish architecture, which places an emphases on both modern and historic building styles.