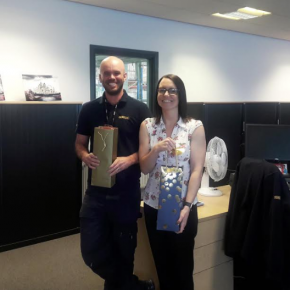 They are two of only nine people who have achieved 100% in the history of the ADSA exams since its inception in March 2014.

Other members of this elite group include fellow GEZE UK colleagues Dan Stack, Stephen Maynard and Nat Stanswood, meaning over half those who gained full marks are GEZE UK employees.

ADSA has developed the exam to guarantee member’s employees understand and comply with it, with the pass mark at 72%

Kaz Spiewakowski, GEZE UK MD, expressed how proud the company are of Rachael and Matt’s achievements: “We pride ourselves in the expertise our teams offer to clients and this goes to prove how committed they are to delivering that. I would like to wish them the warmest congratulations on their success.”

Dave Hill, MD of ADSA, praised GEZE UK, saying: “It has always provided their employees with the full one-and-a-half days training package for the Standards Authorised Technician Course and this has delivered an above average success rate.

“Out of 1800 persons who have taken the exam nine have passed with 100 per cent of which five worked for GEZE UK. This proves the value of face to face training and the investment GEZE UK have made in education.”