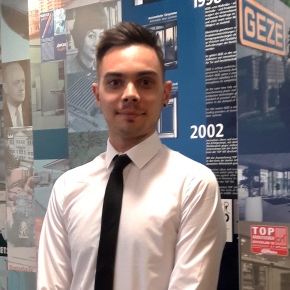 Having joined GEZE UK in 2011, Luke Carroll has recently been appointed to the role of Sales Manager for Window Technology Systems.

Originally a member of the technical support team, Luke will now oversee the Southern region – including Lincoln, Derby and Nottingham in the east, through to mid and South Wales in the West, and from Birmingham and the Midlands to London and South east, and down to Cornwall.

Andy Howland, sales and marketing director of GEZE UK comments on Luke’s appointment: “Luke has gained considerable experience of the organisation and its markets since joining us in 2011. He knows the product ranges well from his time working in technical support and gained valuable commercial knowledge from his time in estimating. His move into sales has been hard-earned and we have every confidence that he will achieve great things in his new role.”