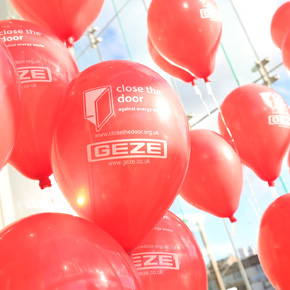 GEZE urges retailers to ‘Close The Door’ with new campaign

The GEZE UK sponsored Close The Door Campaign is urging retailers, architects and specifiers to consider the environmental and financial impact of keeping shop doors open when specifying entrance systems.

Following prediction of severe temperature drops and a spare capacity of just 1.5% in National Grid energy reserves, the Close The Door Campaign found that retailers could reduce their winter energy consumption by between 30-50% by simply shutting their doors when the heating is on.

In 2013, the retail sector consumed a staggering £3.2 billion of energy and as an industry has the second highest energy consumption in the UK.

Research by Cambridge University commissioned by the Close The Door Campaign proved that keeping a door open and using air curtains and additional heating significantly increases energy usage, in turn driving up CO2 emissions. By closing the shop door these figures were reduced by up to 10 tonnes per annum for heating days alone, the equivalent of three return flights from London to Hong Kong.

Open doors also make it much more difficult to maintain the accepted guidelines for a healthy working temperature for staff.

Specifying the right door can also have a significant contribution to maintaining a building’s energy efficiency. By considering the environmental benefits of shutting the door during the specification process, retailers, architects and specifiers can create a welcoming entrance that offers maximum energy efficiency.

GEZE UK’s managing director Kaz Spiewakowski explains: ”There are a wide range of sliding, swing and revolving automatic doors available to suit every application.  Activation products such as unidirectional radar sensors ensure automatic doors are only open when a user approaches, closing again as they depart, which reduces ‘hold open’ time by 40 per cent.  What’s more automatic doors allow shoppers to enter and exit a store without needing to break stride, juggle shopping or let go of a trolley.

Ultimately, for retail environments you need to specify an automatic door system that will open and close efficiently, maximise footfall and minimise heat loss or gain.”

The need to reduce energy consumption is particularly important in 2016. This past November, the National Grid appealed for more power for the first time in three years, whilst energy regulator Ofgem has warned that without action the grid’s spare capacity could drop to zero.

At the same time, the MET Office has predicted temperatures as low as -14C in January.