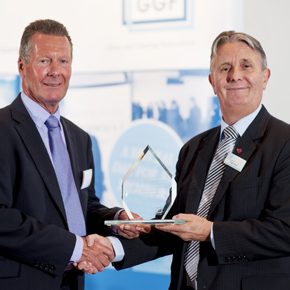 The Glass and Glazing Federation (GGF) has congratulated Saint-Gobain on its 350th anniversary and evaluated the strong working relationship between the two organisations.

Saint-Gobain companies have been members of the GGF since the early 1990s, with representation at over 20 Specialist Groups and Committees.

GGF President Brian Baker has worked with the Federation on behalf of Saint-Gobain companies since their membership began; with most of Saint-Gobain’s input during this period coming through Brian.

Brian described receiving the award as “a genuine privilege”, and continued to recognise the relationship between the two companies.

He commented: “It is extra special to accept it as GGF President on an occasion such as Members Day. Though it was a pleasant surprise, it really shouldn’t have been when one considers all the work, time and effort shared between Saint-Gobain and the GGF to advance the industry.”

Over the years, Saint-Gobain has played an important role in the development of the GGF technical information and expertise.

The Glass & Glazing Federation was founded in January 1977, amalgamating the representative bodies of the major parts of the industry at the time.

In the early 1980s, Solaglas became one of the UK’s biggest names in the glass industry after a merger of James Clark & Eaton and (Royal) Doulton Glass. The company was eventually acquired by Saint-Gobain in the early 1990s and its relationship with the GGF began.

The companies continued to work together over the years, with Saint-Gobain contributing to technical publications such as the Glazing Manual and the Safety and Security Good Practice Guide.

In September 2009 the Saint-Gobain Group operating in the UK and internationally secured GGF Membership.

Giles Willson, GGF Managing Director commented: “It’s important for the GGF as the industry’s leading trade organisation to have large global players such as Saint-Gobain on board to help drive our strategy and activity. Since the GGF was formed, we have grown stronger because of the quality of our Members.

Saint-Gobain have made and continue to make an invaluable contribution, in particular on the development the GGF’s technical information that has served our Membership and the industry so well for the many years. I wish them all the best in this landmark year.”