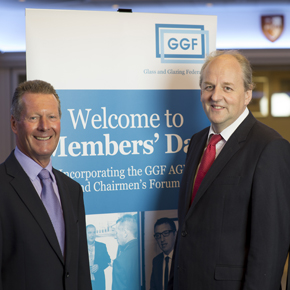 GGF recently held its second Members’ Day on 1st September as it welcomed 130 visitors into Glaziers Hall, London for a day of presentations, launches, awards and networking for GGF Members.

The Members’ Day consisted of a strong line-up of keynote speakers from the worlds of politics, retail, broadcasting, market research, government and the public sector.

Lord Redesdale, former energy spokesman for the Liberal Democrat Party, opened the event with a speech on the energy sector and the issues that will affect the UK’s energy consumption in the future.

Focusing on the consumer

Television business commentator Clare Rayner followed, delivering a presentation on the way consumers are evolving and how businesses need to adapt to embrace the “new consumer” and meet their growing expectations.

Brian Smith, GGF Director of Home Improvement, then presented the GGF Conciliation Scheme and how consumer facing Members should use the GGF Deposit Indemnity scheme to gain greater consumer confidence.

Brian also explained the new GGF Consumer Code of Practice which all Members must adhere to.

Near the end of the consumer presentations, James Lee, Head of Group Marketing, provided a preview of GGF’s new consumer website, myglazing.com and outlined the overarching objectives behind it.

James commented: “MyGlazing.com will provide an online platform for the GGF and its Members to engage directly with consumers. The GGF trade site is visited by over one hundred thousand consumers each year and MyGlazing.com aims to communicate with homeowners in consumer-friendly language.

Other Members’ Day highlights included a presentation by Robert Palmer of Palmer Market Research on the state of the market, an update from GK Strategy on the GGF’s political campaigns and in the afternoon, presentations from seven Chairmen of the GGF specialist groups.

The occasion also marked the 350th anniversary of Saint-Gobain, with GGF President Brian Baker accepting a special award on behalf of the company.

Nigel Rees commented: “The GGF felt it was only appropriate to make this gesture as Saint- Gobain is the oldest brand in our industry and have contributed so much to the GGF and the industry over many years.

It is particularly fitting that Brian as President accepted the award as his work with the GGF on so many fronts has been and still is exemplary.”

Brian described accepting the award as a genuine privilege, commenting: “It is extra special to accept it as GGF President on an occasion such as Members’ Day. On behalf of all at Saint-Gobain, sincere thanks to the GGF for this award.”