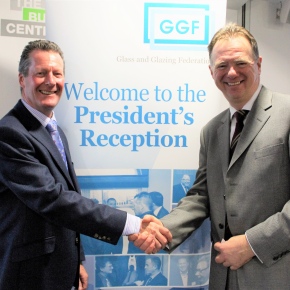 The Glass and Glazing Federation (GGF) are welcoming its new president, Alan Burgess (Managing Director of Masterframe Windows) at the President’s Reception on February 2nd at The Building Centre in London.

Industry dignitaries and GGF employees made up over 80 guests that Brian Baker, GGF Chief Executive (Interim), hosted presentations before, for the event, reflecting on his own presidency (which ended in December 2016) and providing an update on the changes at the GGF in the last 12 months.

Brian thanked Nigel Rees, former GGF Chief Executive for his 22 years of loyal service to the federation. Nigel was then invited to the GGF and the industry to say farewell.

Brian then welcomed in new President, Alan Brugess, who delivered an engaging inauguration speech that covered the challenges ahead and also outlined his aspirations for the federation.

Alan explained that he was delighted to have been appointed President of the GGF for 2017. He also added that he was aware of the substantial personal commitment required and promised that the good work of the current Board Members and former Presidents is continued and developed.