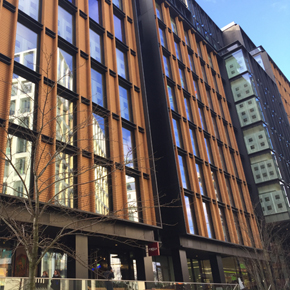 Gilberts (Blackpool) has supplied a ventilation solution to tackle spot heat caused by high levels of computer use at Google’s temporary London offices.

Google is currently renting the office space to accommodate 4,500 staff whilst it awaits the completion of its new 1m square-foot offices in Kings Cross.

The company contacted Gilberts (Blackpool) to upgrade its existing air movement system to provide better performance in terms of control over airflow and temperature.

Google also wanted a more modern, ceiling-free environment that could be created with minimal disruption.

Gilberts delivered a solution whereby the existing linear ceiling diffusers were re-used, with the original blades removed and replaced with modified deflectors. 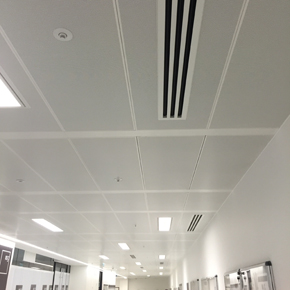 The vanes in the new system, which now form a core element of Gilberts’ GZL ‘Zipp-Air’ slot diffusers, were originally developed to address a moisture and humidity issue at the Hong Kong MTR underground transport system.

The diffusers at the Google office now deliver multi-directional airflow, whilst the blades are positioned in 100mm increments instead of the standard 200mm to simultaneously provide more control and greater airflow.

A semi circular air distribution pattern under the diffuser face enables induction mixings with the room air and a rapid fall off in discharge velocities. As a result, high air change rates can be easily accommodated within normal comfort condition parameters.

The solution delivered the air movement requirements needed, with the additional benefit of re-using the existing linear ceiling diffusers to save money, materials, carbon and time.