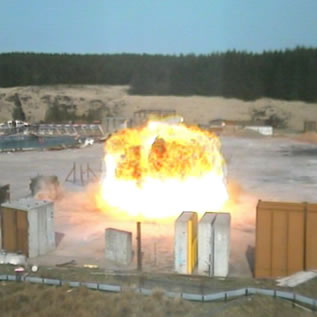 Live testing was carried out by the Wrightstyle team at a highly secure facility, with a lorry bomb being detonated 75 metres from the test rig and a car bomb at a distance of 20 metres to produce a higher pressure loading and shock on the façade.

Both tests proved successful in protecting against the impact of fire or blasts due to the use of a glazing technique that bonds the glass to its framing support, ensuring that the components work together to safely absorb the shock and retain the glazing elements in the event of an explosion.

The Security Service (MI5) points out that terrorists are increasingly targeting soft’ areas, including social and retail venues, tourist sites and transport networks, meaning more of these systems need to be incorporated into building regulations to create resilient built environments.

In an attack in an urban area using explosives, between 80-85% of all secondary blast injuries are caused by flying glass which has shattered as an impact of the shock wave, contributing to the most usual cause of death in blast victims.

Wrightstyle’s systems are aesthetically no different from non-fire or blast alternatives, giving architects more freedom to design buildings incorporating a great deal of glass whilst limiting the damage caused by terrorism to property and most importantly, to people’s lives.