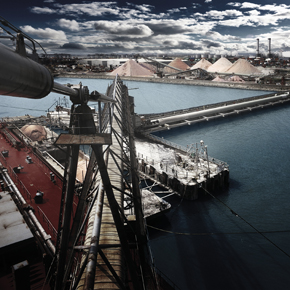 Aggregate Industries is celebrating 30 years of shipments from the Glensanda super quarry, situated in the Morvern Peninsular, near Oban on the West Coast of Scotland.

Glensanda has been the flagship site of Aggregate Industries since 1986. It is the largest granite quarry in Europe with an annual production capacity of over 9 million tonnes and 760 million tonnes reserve of granite.

Over the past three decades it has become one of the most valuable exporting business in Scotland and accounts for almost all aggregate exported from Britain. The site is one of the largest single quarry operations in the world, employing 120 people and supporting an additional 300 third party jobs.

First discovered by John Yeoman, Glensanda was first named in a report by the government in the 1970s that identified potential coastal super quarries. The first extraction from the site began in 1986 and the first shipment from Glensanda was completed on 5th August of the same year to Houston Texas, delivering the granite to the US Gulf market.

To date, more than 5,500 shipments have been made to major projects throughout Europe including the Channel Tunnel, Schipol Airport in Amsterdam, the Olympic Park for the London 2012 Olympic Games and the new London Gateway container port.

Accessible only by sea, the site is renowned as one of the most efficient mineral extraction operations in the world. To ready the granite for shipping, it is crushed at the top of the mountain, before being fed 300 metres down into the core of the mountain, then through a 1.8 kilometre horizontal tunnel to the foreshore, where it is washed, screened and stored.

The granite is then shipped by Glensanda’s own fleet of purpose built ships which includes the Yeoman Bontrup Yeoman Bridge – the two largest gravity fed self-discharging bulk carriers in the world.

The fleet is capable of transporting almost 100,000 tonnes of granite to deep water ports around the UK and Northern Europe on each shipment.

Aggregate has continued to invest in the site over the past 30 years, most recently spending £30 million on a new crusher and delivery system in 2014.