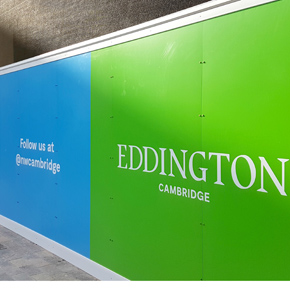 Hoarding and screening specialists Plasloc have been contracted to provide a £1bn development at the University of Cambridge.

Plasloc’s hoarding solutions will help to ensure the safe completion of large-scale building works on the North-West site of the University, just outside the city centre.

The ‘North-West Cambridge Project’, is a £1bn development which has been years in the making. Plasloc has initially been involved in the early phases of the task, consisting of retail units.

The new site is set to include housing for students, staff and members of the public, as well as a variety of facilities such as a doctor’s surgery, supermarket and nursery. 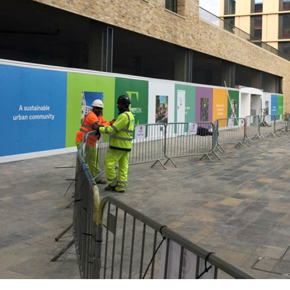 Founder of Plasloc, Steve Matthews comments: “We’re thrilled to be involved in a project as ambitious and exciting as the North-West Cambridge project.

“We’re extremely proud of our product’s ability to adapt to and thrive in challenging environments and as part of this task Plasloc had to overcome difficult variations in floor levels, whilst also taking care not to damage the newly-finished stone flooring.

“We achieved this by producing specially-designed plastic feet for our hoarding which prevent steel jacks from rusting and staining the ground.”

Wildlife have also been considered as part of the project, with Plasloc also supplying and installing debris netting to protect the unoccupied retail units from curious animals.

The netting was put in place using Plasloc’s H section jointing rail, allowing the fabric to be pulled taught, reducing the chances of movement in future.

Sustainability is another key interest for both Plasloc and the University, with the latter due to plant approximately 2000 trees and plants across the site in the first phase of development, whilst the finished complex will house the UK’s largest rainwater recycling system.

Plasloc will be recycling the screens used from the site once they are removed, allowing for more Plasloc to be produced. This creates zero waste and sets the company out from competitors.