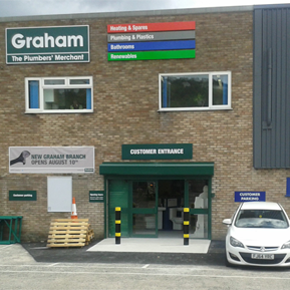 Graham extends its reach across the UK

Graham Plumbers’ Merchant has broadened its number of branches located through the UK, opening new stores in Swansea and Leamington Spa this summer.

Opening on 10th August, the Swansea Graham Branch is hosted within an existing Jewson store, offering local customers a new location to purchase plumbing and heat parts and accessories.

Commenting on the addition of the Swansea branch, Graham Area Director Lee Cattermole said: “I am delighted that we have brought a branch of Graham to Swansea.

We managed to get the branch open and trading within 10 weeks so when you take into account the amount of work required it highlights to me the importance of having a plan, working as a team and making sure the communication between all departments is ‘hardcore’.”

Speaking about the new branch in Leamington Spa, Paul Hawkeswood, Graham Area Director said: “It’s important that we continue to provide for all the installers and plumbers across the country, so I am delighted to be opening a new branch in Leamington Spa so that local plumbing and heating professionals can get their hands on the best products available, without the need to travel too far.”

Contact details for both the Swansea and Leamington Spa branches can be found below.