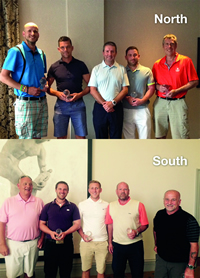 Beginning in mid-May, Graham branch families across the UK competed for their respective regional trophy, from Scotland to the south coast of England.

More than 840 participants took part in the event, with golfing venues ranging from the Cathkin Braes Golf Club in Glasgow to Weston-super-Mare Golf Club in Somerset.

Graham’s Evesham branch won the Northern final, whilst the Harrow branch came out victorious in the Southern final.

Graham’s Evesham branch came out as winners of the Northern final at the end of June, taking the title at Slaley Hall in Northumberland with a point total of 89.

The Hamilton branch was runner-up with 80 points.

Charles McArthur, Branch Manager at the Evesham branch said: ñIt was a fantastic tournament and gave us a great opportunity to interact with suppliers and customers on a social level too.We nearly won the golf cup a few years ago, so it’s great that we’ve finally managed to get our names on the trophy this time around.î

The Southern final took place at Bowood Park Golf Club in Wiltshire at the start of July, as the Harrow branch claimed the top prize with a 100-point victory.

John Strongitharm, Branch Manager at Harrow said: ñIt’s great to have won the tournament. The final was very enjoyable and to top it off, we had great weather – unlike the round before! Everyone enjoyed themselves, especially the customers. Our whole team did really well and we hope to take part again next year.î