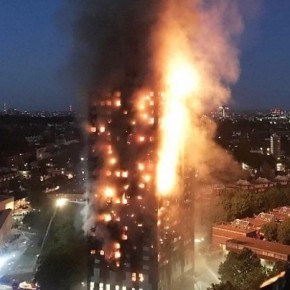 Questions are being raised over fire safety measures and building regulations following the fire at Grenfell Tower block in West London, which has left twelve people dead and many more critically injured.

The blaze, which has left the 24-storey residential block in ruins, has put fire safety measures under the spotlight, following reports that Theresa May’s new Chief of Staff Gavin Barwell was one of a number of housing ministers who have failed to act on calls for tighter regulations.

It has been put forward that successive housing ministers, including Mr Barwell, failed to act on a series of recommendations made by the All-Party Parliamentary Group on Fire Safety, including the installation of sprinkler systems, following a similar incident at Lakanal House, South London, in 2009.

“We understand that there are around 4,000 tower blocks that don’t have fire sprinklers fitted into them.

“That was a recommendation, which was down to each local council and landlords to determine the appropriateness of this. We were strongly recommending this as the fire at Lakanal House spread within four minutes to the flat above and went on to kill six people regrettably.

“Our group recommended that due to the speed that the fire spread in Lakanal House, that building regulations should be reviewed. It’s nearly 11 years since it has been reviewed. Successive ministers since 2013 have said they are still looking at it.”

The Fire Sector Federation (FSF) is one of many groups that have expressed concerns about both the lack of stringent regulations, and the combustibility of the building materials used on the high-rise, specifically the exterior cladding.

The tower block underwent a £9 million refurbishment in 2015, which included the installation of new cladding, comprising two aluminium sheets with a polyethylene core.

It has been reported that buildings in France, the UAE and Australia that had similar cladding have all been hit by fires that spread.

Rydon, which completed the renovations, said the work met all fire regulations. However, both before and during the refurbishment, the Grenfell Action Group said that the building constituted a fire risk and that access for emergency vehicles was severely restricted.

Paul Fuller CBE, Chair of the Fire Sector Federation commented: “Today’s tragedy will be felt throughout the fire sector, where all our efforts are focussed on ensuring the safety of our communities and of ensuring that our buildings are adequately protected.

“There is no doubt that there will be questions to answer and the Fire Sector Federation will continue to investigate and campaign for improvements in fire protection and fire safety legislation.”