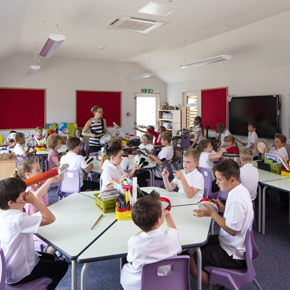 Fermacell’s gypsum fibre dry lining boards have been used on a series of modular classroom buildings as part of a pioneering school build by specialist timber frame manufacturer Scotts of Thrapston.

The product was used throughout the classroom, group room, lobby, toilets and storeroom of the 18.5m x 6.5m building, which was contracted as a flat pack over two weeks at Scotts’ production facility in Thrapston. The building was then transported by truck to Weldon and erected by a team of four men using an all-terrain fork lift truck over the six week holidays.

The new building is more than twice the size of its predecessor, making use of full-length windows to maximise natural daylight and reduce the school’s reliance on artificial lighting.

Scotts’ business development manager Philip Goldstone commented on the specification of the gypsum fibre boards: “Their density helped from a structural engineers’ point of view and their robustness provides good impact resistance which is essential in this sector.

“From a fire resistance point of view they have a good burn time and they are moisture resistant. But probably most impressive is their racking ability. Their holding strength is such that we don’t have to do any reinforcing. The school can hang its wipe boards and shelving without any damage occurring.”

An additional benefit of the boards was that they do not need skimming, and were installed and finished with no issues.

The boards have now also been used on the walls and ceilings at Sutton Benger Primary School in Chippenham, Wiltshire.