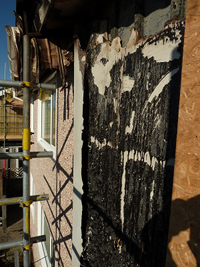 The Fermacell boards were the only element of an external wall insulation (EWI) project remaining after a semi-detached house went up in flames.

The semi-detached house was one of the 4,000 post-war British Iron and Steel Federation (BISF) properties being refurbished to Decent Homes standards by Plymouth Community Homes, in a £168 million five-year investment programme.

The fire is believed to have been caused by a child playing with matches in an upstairs room.

The family managed to escape unhurt, but the blaze gutted the interior of the steel-frame, steel-clad house and part of the adjoining property via the roof.

ELC Contracts had just began to apply render to the EWI which had melted in the inferno.

The original BISF metal lath also melted and twisted in the fire, which is believed to have reached temperatures of 2,000?C.

The Fermacell Gypsum fibreboard panels on the façade of the two-story house remained mostly unscathed, other than an area around the eaves where the fire brigade punched through to gain hose access.

Fermacell was specified as an EWI backer board for its Class A2 (half-hour) fire resistance and comparatively light weight.