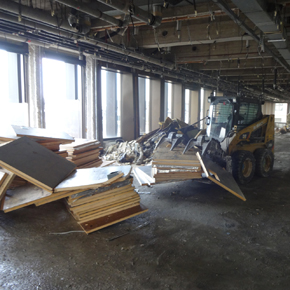 ‘Closed-loop recycling’ has been identified as a key contributor to achieving higher recycling rates of gypsum waste, according to a three-year study initiated by the European gypsum industry.

The Gypsum to Gypsum (GtoG) project identifies best practices for the deconstruction, recycling and reincorporation in the manufacturing process of recycled gypsum. The project also looks into the future implementation of a sustainable value chain between demolishers, constructors, recyclers and manufacturers.

The GtoG project is led by Eurogypsum and co-financed by the European Commission Life Programme and focuses on the way gypsum-based wastes are treated in eight EU countries: Belgium, France, Germany, Greece, Poland, Spain, the Netherlands and the UK.

The project estimated that an approximate 1,150,000 tonnes of plasterboard waste was generated in 2012.

The recycling of plasterboard waste from production, construction and demolition sources varies considerably from country to country. With only a small percentage of Europe’s demolition waste being recycled, the sector was highlighted for having lots of potential.

In response to these findings, the final GtoG report recommended that the development and support of plasterboard value chains should be set up at country level alongside a continuos exchange of best practices across Europe.

The report revealed a lack of enforcement of the EU’s Waste Framework Directive (WFD) in certain EU states and also called for a commitment to match the WFD with national legislation.

GtoG looked to the EU to assure full and proper implementation of the Directive, as well as greater focus on the design of plasterboard systems for increased recyclability and to promote a mentality of waste prevention.

The scheme also made recommendations for collaboration between constructors, demolishers, waste collectors, recyclers and manufacturers to achieve a ‘closed-loop’ system – suggesting a platform between stakeholders around Europe to exchange best practices.

Plasterboard manufacturers, including Knauf, British Gypsum and Siniat, made a major contribution to the GtoG Project, including conducting five pilot trials in four countries and pushing the recyclate incorporation rate up towards 30%.

Crispin Dunn-Meynell, Secretary of the Gypsum Products Development Association, commented: “Gypsum products can be counted amongst the very few construction materials where ‘closed-loop’ recycling is possible, that is where the waste is used to make the same product again and again.

Our member-manufacturers have played a proactive role in the GtoG Project and will continue to work with stakeholders from the European gypsum industry to implement the Project’s recommendations for achieving the ultimate goal of a circular economy for the construction sector.”