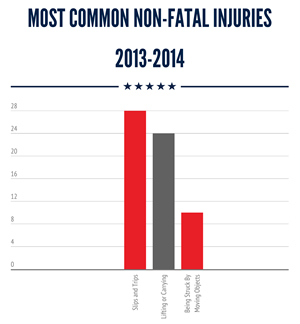 Handling Injuries in Great Britain 2014′ highlights the hazards of manual handling and the importance of implementing health and safety procedures.

The highest percentage of incidents occurred in the water and waste sector – with 350 of 100,000 employees reporting a manual handling related accident.

The most common injuries reported were caused by slips and trips, whilst 10% of recordings involved being struck by moving objects. The report assured that no injuries were fatal.

The transport and storage industry accounted for 3101 handling injuries – which combined with health & social care and manufacturing accounted for over half reported incidents.

On average, 6.6 working days were lost and 8% of major or specified injuries were directly related to manual handling. In addition, more than 90% of workplace manual handling incidents resulted in over a week off work.

The report reveals that since 2013, 44 enforcement notices were issued and involved requirements to improve manual handling operation regulations.

This included both warning and immediate prohibition.

Whilst recorded enforcements have increased since 2012/13, they are still lower than previous years – between 2010/11, 71 notices were implemented.

The report highlights that both employees and employers share the responsibility of actively reducing the risk of injury in the workplace.

Companies, such as SHS Handling, supply products aimed at reducing the risk of accidents related to manual handling.

These products can be used to implement a higher standard of safety protocol.