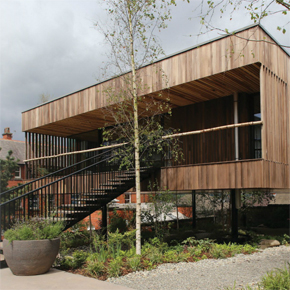 Maggie’s blueprint for its cancer care centres is a building that sits quietly in the landscape – a place that instils an air of tranquility and wellbeing, where people can chat over tea around the kitchen table.

dRMM Architects wanted not only to design the latest Maggie’s in Oldham in wood, but use it to stretch boundaries in timber-based construction.

With its core structure in American tulipwood cross-laminated timber (CLT), the new building brings together the client’s brief and the architect’s ambition seamlessly. ABC&D Magazine finds out more…

Maggie’s Oldham, the world’s first building made from hardwood cross-laminated timber (CLT), has opened in the UK. Designed by dRMM Architects and supported by the American Hardwood Export Council, this is a pivotal moment for modern architecture and construction.

Maggie’s is a charity that provides practical and emotional support to people living with cancer. Built on the grounds of specialist NHS cancer hospitals, Maggie’s Centres are warm and welcoming places with qualified professionals on hand to offer a programme of support, shown to improve physical and emotional wellbeing.

dRRM chose tulipwood for the design of Maggie’s Oldham, for its inherent beauty, strength and warmth, and the positive influence wood has on people. Wood is known to significantly reduce blood pressure, heart rates and recovery times; it has more health and wellbeing benefits than any other building material, according to the Wood Housing Humanity Report 2015. 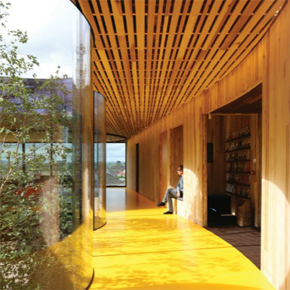 “In the 1980s, my siblings and I rebuilt my tree-expert mother’s house in plywood, and the Guardian dubbed me the king of ply!” exclaimed co-founder of dRMM, Professor Alex de Rijke.

“Then cross-laminated timber (CLT) arrived, effectively a super plywood, and I saw it as a medium to use in the modern context on larger scales, and to advocate for ecological reasons; its sustainability, lifecycle and carbon performance.

“People also like living with wood; it is tactile, and timber buildings have a different air quality.”

Maximising the benefits of a timber environment

Maggie’s was also enthused by the idea of building in timber, although, initially, it didn’t seem to fully appreciate the benefits above and beyond standard CLT.

“They asked why not just use standard softwood CLT?” said project architect, Jasmin Sohl. “So we explained that the variegated tulipwood and finish quality would allow the wood to be expressed, maximising the psychological and therapeutic benefits of a timber environment. In addition, the structure would feel like a fine piece of furniture.”

Maggie’s also queries the budget impact of using tulipwood rather than cheaper spruce. However, while involving some cost engineering, it proved competitive.

This pioneering piece of permanent architecture is constructed from more than 20 panels of five layer cross-laminated American tulipwood, ranging in size from 0.5 to 1.2 metres long.

American tulipwood CLT was pioneered in 2013 by dRMM, AHEC and Arup for its unparalleled strength and lightness, speed of construction and sustainability. American tulipwood is approximately 70% stronger in bending than a typical CLT grade softwood. The structural CLT panels for Maggie’s Oldham were developed by CLT specialist, Züblin Timber.

Adding interest, some panels were also curved. They included custom cut-outs and a routed recess detail so doors could close flush without additional door frames. The centre stands atop 4 metre steel legs on concrete pads within Royal Oldham Hospital grounds. Its garden slopes downwards and panoramic vistas stretch to the Pennines.

“Besides the view and slope, the location was right as it juxtaposes Maggie’s with the hospital, which purports to be a place of healing, but, like others of its era, incorporates environmentally unsound materials,” said de Rijke. “Besides a manifesto to healthy architecture, the Centre is a critique of conventional hospital building.”

dRMM summarises its design as a “matchbox on stilts, with a hole through the middle, like a cored apple.” However, the concept’s simplicity belies the intricacies of its design.

Firstly, the six stilts “do some pretty clever things”, supporting significant cantilevers. Above, the CLT panels, which are five-layer, 100mm thick, 0.5 to 1.2 metres long and 2.93 metres high, form a structural element in the single-storey building, with either end comprising oak-framed glazed doors and windows from Aresi of Italy.

“On one side, the CLT wall forms a full-height beam,” said de Rijke. “Opposite, a straight outer wall combines with curved interior walls, separating kitchen, other spaces and services, to act as beam and bracing. 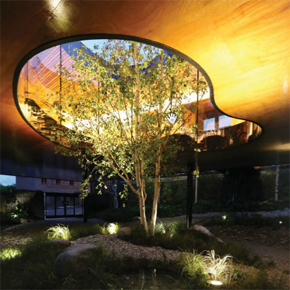 The building’s hole in the middle – a curving shape – is enclosed in double glazing from IPIG with a tree teaching up through it. “We wanted to bring nature inside the building – you can walk in the garden below and look up through the lightwell to the sky,” said Sohi.

The curve of the interior CLT walls hug the contours of the glass, while poured resin floors reinforce the sense of flow. The slatted ceiling in the flat-roofed structure is also American tulipwood, made from leftover wood from the CLT fabrication process to ensure no waste.

The building is naturally ventilated via stoppable holes in the walls and incorporates a wood burning stove. However, as de Rijke explained: “It is unlikely to need much heating, given the cLT is naturally insulating and combines with Homatherm wood fibre wall insulation.”

The Centre breaks further new ground by featuring thermo-treated tulipwood exterior cladding. This is created by kilning without oxygen to over 200ºC, which alters timber at cellular level and imparts superior dimensional stability and durability to class 1, equivalent to tropical hardwoods. It is the first time that TMT tulipwood has been used to clad an entire structure in the UK.

The finished building, which also includes thermo-treated American ash decking, is described by de Rijke as a “synthesis between architecture, structure, furniture, landscape and art, it’s a modest form but expressive and carefully made and detailed.

“The architecture will also be completed with a reversible silver and yellow velour and a leather curtain by Dutch artist, Petra Blaisse, which will define the living area and allow interior spaces and colours to change.”

“This structure proves that hardwoods have a role to play in the timber construction revolution,” commented David Vernables, European director of AHEC.

“All our previous projects – Timber Wave, Out of the Woods, Endless Stair and The Wish List – have been significant projects, but this centre proves that a building made of tulipwood CLT is possible, and it can be done on a strict hospital budget and in record time.

“dRMM also believes in the potential of tulipwood CLT as bringing a revolutionary new element to wood construction.”