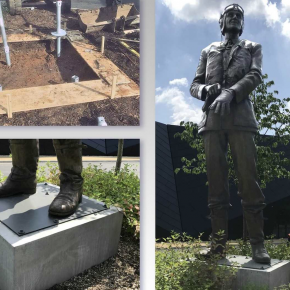 Due to the proximity of this new statue to both electrical and drainage services, Dixie micro-piles were selected as a reliable and cost-effective alternative to traditional concrete foundations.

These Helifix pipe piles screw into virtually any type of soil, quickly and easily, with minimal disruption, noise or spoil removal and would be easier to extract from the ground in the future, by simply being ‘unscrewed’.

Detailed ground investigations showed the area to have a top layer of made ground above clay and sandy gravels, with load bearing strata at around five metres. Four triple flight Dixie micro-piles were torque-driven to the design depth using the hand-held Helifix hydraulic drive head.

Each micro-pile was levelled and topped with an engineered steel plate, which were then cast into a metre thick concrete plinth to which the new statue was affixed.

For project-specific technical advice on the use of Dixie micro-piles, for both temporary and permanent foundations of new build structures or remedial support for existing buildings, contact the Helifix team on 020 8735 5200.

Furthermore, Helifix operates a nationwide Approved Installer scheme – details of your local approved contractors can be found by contacting Helifix.