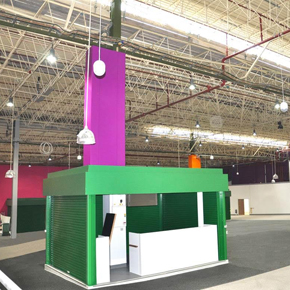 Kirkgate Market in Leeds is one of Europe’s largest indoor markets, with a rich history stretching back to the early 19th century. It has recently undergone a £13.7m refurbishment undertaken by Leeds City Council which included the specification of bespoke column casings from Contour.

The column casings were specified as a key part of the transformation to the ‘1976’ Hall, which has been turned into a unique central meeting point for shoppers. The 4.5 metre high casings encircled floor to roof I-beams and were positioned above four catering units in the hall.

An effective combination of function and form, the casings safely housed a large array of power conduits, water pipes and ventilation ducting whilst presenting an attractive external appearance thanks to an individual 30% gloss RAL colour coating.

The roofs of the catering units were effectively non-weight bearing and therefore could not be used to support the column casings. Furthermore, there was no guarantee that the hall roof would be strong enough to support the weight of the casings without time consuming and costly static load testing. 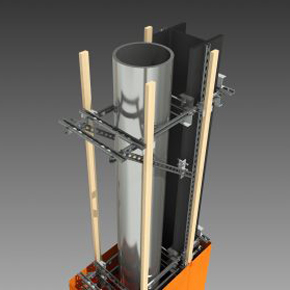 Interserve, the lead project contractors, therefore turned to Contour for a solution which would see the casings suspended by some other means.

Contour developed a bespoke system of attaching the casings to the I-beams which did not involve drilling or affecting the structural integrity of the beams using a Unistrut frame. The frame was clamped to the I-beam to support the column casing, with a further cantilever arm attached to ensure that the frame did not bend, distort or slip down the beam once the weight of the casing was fully applied.

Importantly, force calculations were undertaken to determine the exact length of the cantilever arm and its angle of attachment. During the load tests, Contour subjected a single supporting frame to weights in excess of 100kgs. The frame system easily passed the testing process, meaning the installation could proceed in full confidence.

The column casings themselves were manufactured from 3mm aluminium sheet to provide strength, rigidity and lightness. To allow for the pipework and ducting to run through, each casing required numerous cuts out that were programmed during manufacture to minimise on-site cutting.