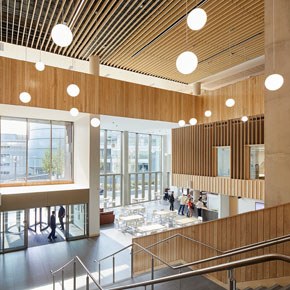 Hitting all the right notes in Birmingham with Aggregate

As part of their recent, extensive portfolio in the UK’s second city, Aggregate Industries have provided nearly all the internal concrete for the development of the Birmingham Conservatoire.

The grandiose building is a £57 million teaching and performance facility, which features an impressive 500-seat concert hall, alongside a recital hall, organ studio and a dedicated jazz club, is regarded worldwide as a top class venue for students and the community.

Overall, Aggregate Industries supplied a mammoth 4,000 cubic metres of RC40 standard concrete to the project; 85% of all the concrete used in the internal structure, which was used to create the ground works and concrete frameworks for the build.

Vitally, Aggregate had two concrete plants in a three mile radius of the project, ensuring deliveries were quick and simple. 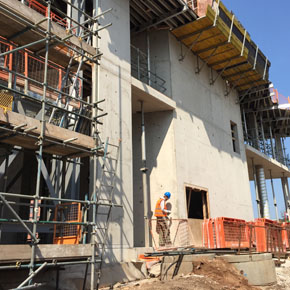 Aggregate worked with Thames Formwork throughout the period, with the two companies having previous experience of working alongside each other, as they teamed up for the redevelopment of the city’s Snow Hill station.

Aggregate Industries General Manager for the Midlands & North, Daniel King, spoke of his delight regarding working in such a high profile project.

“As with our recent work together at the Snow Hill redevelopment, we once again worked very closely with the Thames Formwork team each step of the way to ensure a consistent, reliable supply and that all deadlines were met ahead of time. We look forward to working with the team once again in more projects to come,” he said.

Construction Director at Thames Formwork, Wayne Rock, added: “Having previously worked with Aggregate Industries, we knew that they would be able to deliver the quality product supply and extensive expertise required in a project of this calibre and scale.

“Once again, the business did not disappoint and worked very much as an extension of our team throughout the project.”