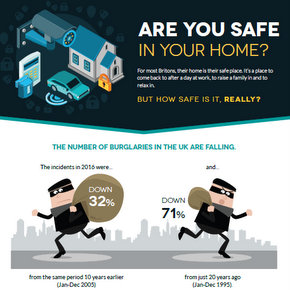 Latest research and infographic from Ironmongery Direct presents a strong case for basic security measures to be built into every home.

In the UK, burglary is a persistent threat. Despite a fall over the last two decades, there are still a staggering amount of offences committed against homeowners. There were 400,361 police-reported burglaries between April 2015 and March 2016, which creates a burglary rate of seven per 1,000 people.

This also means that there are 1,920 burglaries per day, with 1.33 per minute. Clearly, homeowners are not protecting themselves properly. Is this their own fault, or can the building industry do more to defend property from forced entry?

Ironmongery Direct’s research and infographic has presented a strong case for basic security measures to be built into every home. Locks on doors and windows can prevent crime if used properly, as 30 per cent of all burglaries are through an unlocked door or window. Furthermore, a home without a security system finds itself at a 300 per cent greater risk of being burgled.

The same research found that 60 per cent of burglars actively avoid homes with a security system in place, and that a home that fits window locks, indoor lights, double door locks and external motion sensor lights were found to make a home almost 50 times safer!

Clearly, the construction and building maintenance industry stands to benefit from adding security features to properties. For example, adding a burglar alarm also helps deter theft, with 60 per cent of US criminals admitting they avoided houses with them in place.

While much of this information may seem unsurprising, it’s important that everyone involved in the building of homes and the maintenance of property understands the importance of protecting it. With burglaries costing most domestic properties more than £3,000 per incident, it’s more than worth investing in security.

Ironmongery Direct’s full infographic doesn’t just explore the statistics behind burglary and home security, it also shows the evolution of historical methods such as lock systems invented in Ancient Egypt and castle defences. Whatever industry you’re involved in, there is a lot to learn about defending homes from burglars.

View the full infographic to find out more.