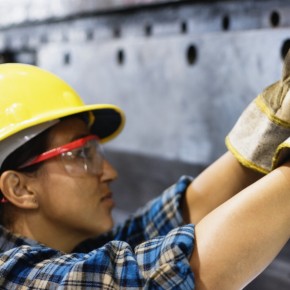 How can construction companies encourage more women in the industry?

According to statistics from UCATT, women make up for less than 1% of those working on a construction site. Though this may not be an unsurprising statistic, it is one that needs to be evaluated and changed.

For such a diverse and important career sector for the UK, gender diversity, or the lack of, is a major cause for concern. This presents a problem that really needs to be solved, but in order for this to happen, the industry, itself, must undergo some key alterations.

The Women’s Engineering Society (WES) found that the UK has the smallest percentage of female engineering professionals in Europe, which has been recorded at less than 10%.

To put this into perspective, countries such as Bulgaria, Cyprus and Latvia all have around 30% of their construction worker positions filled by women. Perhaps even more significant is the fact that “only 9% of the total engineering workforce is female, while only 6% of registered engineers and technicians are women.”

One of the biggest challenges in encouraging woman to explore a career within construction is the way in which the industry is perceived. Generally, when people think of an engineer, they envision someone fixing up a car or motorbike, when in reality; the engineering sector extends way beyond that – to qualified individuals who work in wide range of technically orientated specialisms, i.e aerospace or chemical engineering.

Skanska FM managing director, Katy Dowding, claimed: “We could do a lot better at selling ourselves externally.”

At school level, “there is simply not an understanding that you can have a professional career with good development in the construction industry.” – even more so for women. It may the case that women may only desire to enter the industry if they have been exposed to it by a parent or family member.

In order to raise awareness of careers in construction, career advisors, schools and parents, should provide educational guidance on the industry, with the additional objective of helping to eliminate the stereotype that it is a male-only sector of work.

Changing the perception that the UK construction industry is a male-only career is a difficult task, especially as there are currently such a small percentage of females working within it. Although there is evidence to suggest that traditional gender roles are undergoing positive change; and with it, a growing general acceptance of women within the industry, the percentage still remains low.

Beth West, the High Speed 2 commercial director, suggests that “Attitudes do seem to have changed but the demographics don’t seem to have, though, which is quite troubling.”

Boasting a great variety of job roles that are suitable for those who are technically gifted, good with numbers, creative or have great relationship building skills, the industry really does offer something for people with all different skill-sets and aptitudes regardless of gender. This is something that needs to be emphasised in the promotion of the career.

A company’s greatest asset is its staff, and this certainly remains to be true in the construction industry. A driven, motivated and valued workforce goes a long way in generating a successful company output. By encouraging employees to involve themselves in the future landscaping of the business and the furthering of their own careers, businesses will have much more success in retaining staff and encouraging women, in particular, to overcome any stereotypes and fulfil their potential within the construction industry.

Increasing the number of women working in the UK construction industry requires more than government legislation and guidelines; it requires serious, palpable change. Managers and employees a like need to understand the importance of gender diversity, construction companies need to encourage career development, and fundamentally, attitudes and perceptions of the industry – including women’s role within in – need to change. Of course this won’t only benefit women, but men, too.

One comment on “How can construction companies encourage more women in the industry?”