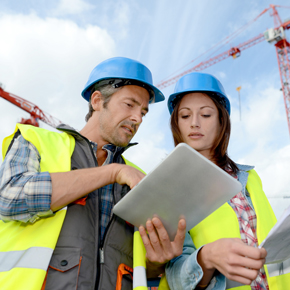 A Randstad survey has shown women are three times more likely to miss out on promotion than men due to perceived gender discrimination.

A survey of over 5,500 construction workers and 540 employers across all job functions and levels observed three quarters (75%) of those ignored for a more senior role were women compared to 25% men.

The findings strongly imply women in the industry are generally not being given the same opportunities to progress as their male counterparts, even though the vast majority of respondents (93%) said having a female manager would either have no affect on their way of working or would, in fact, have a positive impact.

The image of an industry stuck in its ways was not helped by findings that showed nearly half (49%) of those questioned had never worked with a female manager.

Companies with over 250 employees will soon be forced to publish details of their gender pay gap. This attempt at transparency comes as the average gender pay gap in construction stands at up to 45% in favour of men.

Interestingly, whilst it is understood the gap must be closed, 42% of businesses told Randstad they do not actively monitor pay equality.

The Office for National Statistics shoe there are 29,000 job vacancies in the construction industry; with the full effects of Brexit still unclear, companies still seem to be missing an opportunity to look to women to fill leadership roles.

Nearly three quarters (74%) of women had no idea of any initiatives that help women progress into senior positions, indicating employers need to improve at offering programmes and encouraging involvement.

Construction firms said raising the profile of existing female role models comprises part of the solution to bring more women into construction, adding more work needs to be done at school level to promote construction as a rewarding and sustainable career path for women.

Owen Goodhead, Managing Director of Randstad Construction, Property and Engineering, said that although equality and diversity is making leaps forward in society generally, construction is still ‘playing catch up’ in some areas.

“Companies need to band together to build an environment that nurtures and rewards successful, hard working women to move up the career ladder,” Owen said.

“Though the number of women entering construction is slowly rising, retention is a key area that needs development. Organisations that cannot retain, develop and enhance their female workforce will be missing out on key skills, new ideas and ways of working to help keep the industry driving forward.”