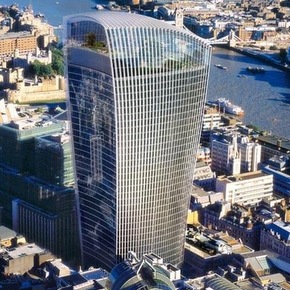 How glass facades can attack the environment

Ahead of the major 2 day conference on Advanced Building Skins, which is taking place 10-11 October in Bern, Switzerland, Andreas Karweger examines how modern skyscrapers and their glass facades can create dangers in the built environment… 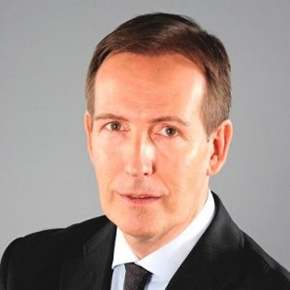 Modern skyscrapers and their glass facades characterise the image we have of our big cities. In recent years, glass façades have started to receive more and more criticism, as they have many negative influences on the environment.

Approximately 250,000 birds die every day in Europe flying into glass façades, according to the Cologne landscape authority’s website. The majority of these birds die immediately from the impact of the collision. Those who are able to fly on usually die later due to internal injuries, fractures or bleeding.

Architects like to use highly reflective glass because it is particularly energy efficient: most of the sunlight is therefore not able to penetrate the building, which reduces the heat development inside. The natural surroundings are reflected in the glass façades; birds don’t see them as an obstacle.

In North America, around one billion birds die every year due to collisions with glass panes. The American Bird Conservancy has developed a programme together with the Green Building Council which should motivate architects to not use as much glass or to use façades which are equipped to protect against bird collisions.

However, people and buildings can also become ‘victims’ of the glare effect which comes from glass façades or photovoltaic modules. Particularly in cities which are located at the latitude of Seattle or London and the position of the sun is 20° or less in summer, the reflection from glass façades is disruptive for motorists, explains Vicente Montes-Amoros from the American engineering firm Curtain Wall Design & Consulting. 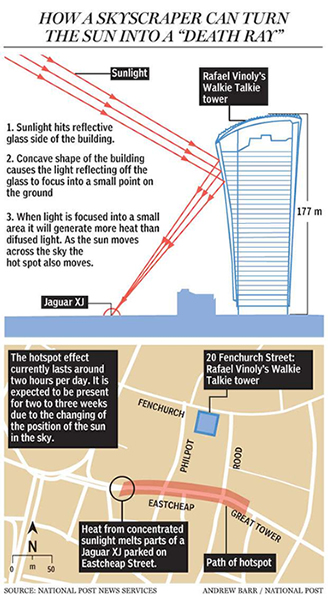 In past years concavely formed façades in particular have received a lot of criticism, as its glass, metal or steel reflect the sunlight onto one place like a magnifying glass.

As a result, temperatures of over 100°C can be reached. Concave facades exist because real estate companies enlarge the space of the more expensive, upper levels, in order to achieve higher rental incomes.

The upper levels then project far over the floor plan of the building. The arched façade of the Vdara Hotel in Las Vegas was hot enough to singe the hair of hotel guests in the area of the pool deck and melt plastic chairs. The hotel was designed by the architect Rafael Viñoly.

Viñoly is also responsible for a building on Fenchurch Street in London, which also has an arched façade. The sunrays bundled together from the façade deformed cars on a neighbouring street and melted plastic. To show the intensity of this, journalists used the concentrated heat to fry eggs. Several parking spots had to be closed off on the street.

Since then, aluminium slats were attached to over thirty floors on the south side of the façade, which stop the solar reflection. The refitting cost approximately £10 million. Despite the massive glare effect, the building on Fenchurch Street had received an excellent evaluation by the British BREEAM.

Sustainability certificates are awarded because of the energy efficiency of a building “without considering the adjoining microclimate”, criticises architect Julie Futcher and town planner Gerard Mills from the University College Dublin.

Due to the increasing number of skyscrapers with reflecting glass façades, these characteristics of buildings, which influence the microclimate of their surroundings and intensify the “Heat-island” effect in cities, should also play a role in the sustainability assessment of a building.

The Walt Disney Concert Hall in Los Angeles has shown just what kind of effects buildings can have on the microclimate. The building designed by Frank Gehry has a façade with concave shaped surfaces made out of polished stainless steel. The façade raised the ground temperature on the pavement so much, that plastic began to melt.

Façades are not only able to reflect the concentrated light downwards, they can also direct the wind downwards in a bundle, which leads to a so-called wind tunnel effect. The wind meets the façade and “then just goes straight down to the ground because it can’t go around the building,” explains Lindsay Smales from Leeds Beckett University in the UK.

In Leeds the 32 floor high Bridgewater Place has led to strong wind gusts, which at wind speeds of 130 km/h didn’t just throw passers-by to the ground. In March 2011 a lorry swirled through the air as it drove out of the slipstream of Bridgewater Place. One pedestrian died as a result.

Curbing the effects of glare The façade of the ‘Walkie Talkie’ (20 Fenchurch Street, London) received worldwide attention through the concentration of solar radiation

What are the possibilities of curbing these effects?

“When the skyscraper is first built, there’s not much that can be done to mitigate the problems with the microclimate and the effects of the wind”, reveals Lindsay Smales. “Ideally the glare effect of a façade should be determined during the building planning, with help from fluid mechanics (Computational Fluid Dynamics, CFD),” explains Vicente Montes-Amoros from the American engineering firm Curtain Wall Design & Consulting.

CFD tools can determine solar reflections with the movement of the sun. 3D models and precisely calculated predictions are an enormous help for the design of sophisticated façades. In addition, building shapes and building orientations, road conditions and material can all be included in the analysis and create the condition for a complete picture.

“In Sydney, Australia, a prior analysis of the glare effect must be implemented. The reflection of building materials is restricted to 20% in Sydney and Singapore,” explains Montes-Amoros.

Vicente Montes-Amoros is a speaker at the Conference on Advanced Building Skins taking place 10-11 October in Bern, Switzerland.

In the session “Effects of Glare off Glass and PV on Building Façades“, speakers from the USA, England and Switzerland discuss methods of measuring and predicting glare.

As part of the international Conference, over 220 speakers from 45 nations are presenting on the latest developments in the design of building envelopes and new products which can increase the energy efficiency of roofs and façades.