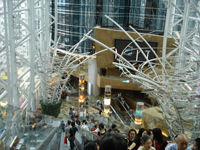 Goldenhall, a retail centre in Athens, has benefited from Wrightstyle’s protective glazing systems

The retail sector has undergone many changes in recent years.

The assault on the Westgate Shopping Centre in Nairobi, for instance, caused the deaths of 67 people and left an additional 175 people injured.

Although the UK itself has not experienced an attack on one of its shopping centres, it has come close.

In 2004, Operation Crevice foiled a plan to detonate explosives at the Bluewater shopping centre near Dartford.

A suspected Al Qaeda bomber is also currently on trial after being charged with plotting to bomb a shopping centre in Manchester.

In November 2014, police forces in the West Midlands, Liverpool and Manchester warned the public of the risks to shopping centres. Its threat level was raised from substantial to severe.

The police were advised to contact every shopping centre with guidance from the British Council of Shopping Centres. The guide required every shop to devise and test a security plan.

However, Wrightstyle believes it is now important to have both active and passive measures in place to contain an explosive incident.

Wrightstyle’s bomb-proof glazing systems have also been installed in Langham Place, a retail and leisure complex in Hong Kong

Wrightstyle’s glazing systems have been successfully tested against a car bomb, a ballistic bomb and a lorry bomb, which is agreed to be 500-kg of TNT explosive.

The tests revealed that, in the event of an explosion, Wrightstyle’s glass would remain intact in its framing system.

This is important as the glass fragments from windows and doors have been found to kill more people in an urban explosive attack than the actual explosion.

As well as providing aesthetic advantages, Wrightstyle’s glazing systems provide safety and protection, having been successfully tested against fire, smoke and bomb attacks.

The company believes the installation of its safety systems is particularly important in today’s uncertain world.