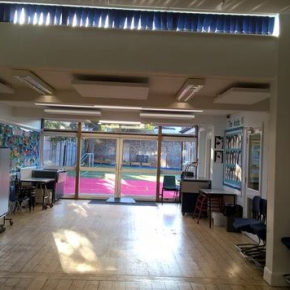 Hush Acoustics have helped deal with acoustic issues within the Junior Department of King’s House in Richmond, a busy all boys school.

Scott Beavers, Estate Manager for Kings House, explained how the increased noise levels during lunch service were extremely disruptive; the hall itself was surrounded by hard surfaces with no sound absorption, which again caused issues when trying to deliver assemblies.

“We invited a few companies to come in and offer us some solutions. Hush Acoustics attended and were very knowledgeable and understanding of the issues we were facing,” Scott said. 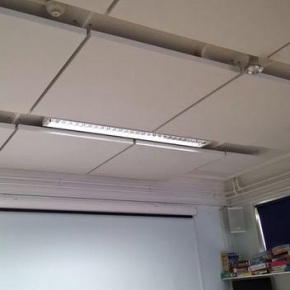 Hush initially visited the school in last December, carrying out tests using its Acoustic Modelling Software to measure the reverberation time within the area.

Reverberation time is the most common way of expressing a room’s basic acoustic character – it is the time taken for a steady noise to decay by 60dB after its source has been abruptly cut off.

After analysing the result of the tests, it was calculated that 31 Hush 50A panels were needed across the ceilings of the two areas to significantly lower the noise levels.

Hush 50A panels are Class A Absorbers consisting of fabric wrapped 50mm thick acoustic foam, with built in support frames allowing for bracket fixing, which in turn, provide an air void behind the absorber for enhanced acoustic performance.

Varying sizes of these panels were used for maximum noise reduction, as well as to be ensure aesthetic appeal.

The panels comply to BB93 standards for school acoustics and building regulations and can also be provided in a variety of different finishes.

Since installing the panels, Kings House Estates Management have said the enhancements made to the space have made a huge difference for the school, as well as the children.

Scott Beavers added: “Work was carried out professionally and the sound reduction/intensity has decreased dramatically. This has really made a great improvement.”

If you work within a school and are experiencing similar issues to Kings House, whether it be during lunch time, assemblies or other activities taking place, contact Hush and it will look into solving the issues for you, with the result being a more relaxed and positive learning environment.