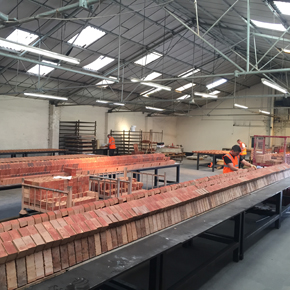 Ibstock – the UK’s largest manufacturer of bricks – has opened a new cutting centre for its Chesterton brick works.

The Chesterton site specialises in custom made brick shapes from the Ibstock-Kevington range of special shapes and prefabricated solutions. This includes Faststack, Fastwall, arches and underslung soffits.

The factory is positioned to support the supply of its specials range across the UK.

The new cutting centre is part of the company’s ongoing investment programme, which has resulted in the doubling of production at the site and a significant increase in staff. Ibstock has also installed the UK’s fasted slipsaw, which is capable of processing up to 8,000 bricks a day.

The company is also investing an additional £55 million at its site in Ibstock, Leicestershire, which is set to boost production by an extra 100 million bricks per year – enough to supply the creation of around 150,000 new houses.