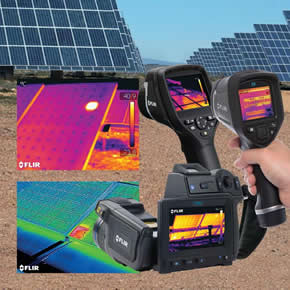 FLIR‘s thermal imaging cameras can be used by maintenance engineers to identify anomalies and defects on a solar panel.

The poor performance of a solar panel can be attributed to a number of factors, such as water leakage, broken solder, delamination of the semiconductor material, or shattered cells and glass.

Maintenance engineers can use FLIR’s thermal imaging cameras to scan installed solar panels whilst they are in operation. Large areas can be examined, and anomalies identified, within minutes.

The images can reveal the extent and effect of the problems with the system, whilst pinpointing the exact location of the fault. By using a high resolution camera, such as one of FLIR’s T-Series models, it is also possible to identify the cause of the problem.

FLIR’s thermal imaging cameras are equipped with its patented MSX technology, which allows for the production of a detailed and textured thermal image.

The technology works by embedding elements from the digital camera image into thermal videos and stills: this ensures that the location of the fault, as well as its nature, is determined.

FLIR will be exhibiting its complete range of thermal imaging cameras and technologies at Intersolar Europe this year. Its new Aerial Inspection Kits, which have been developed to capture radiometric imagery of roofs and other building structures, will also be on display.

The show will take place in Munich from 22nd until 24th June; FLIR Systems can be found on stand B3.460.