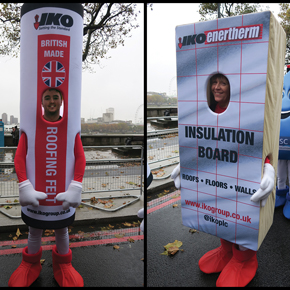 IKO PLC has made an appearance at this year’s Lord Mayor’s Show supporting the Worshipful Company of Builders’ Merchants (WCoBM) float.

IKO staff set out in striking outfits at the 800 year old event, as a roll of IKO Roofing Felt and an IKO enertherm PIR insulation board made their way down the two-mile route alongside UK Group Managing Director Andy Williamson.

Commenting on the event, Andy said: “We had a fantastic float that highlighted what a great industry we work in, and its importance to construction and the economy.

It’s a very popular parade – the streets are always full despite the inevitable rain! – and we were able to use the opportunity to show just a few of the career options available to young people. We were also delighted to be briefly featured on the BBC coverage of the event. Our IKO ‘characters’ were clearly seen at the front of the WCoBM float.”

The Lord Mayor’s Show is traditionally held on the second Saturday in November. The event provides an opportunity for Livery Companies, the armed forces and police, educational establishments and charities to demonstrate their commitment and support for the City of London.