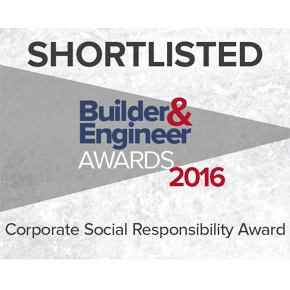 IKO Polymeric’s efforts towards minimising its environmental impact have been recognised by the Builder and Engineer Awards 2016, which has shortlisted the company for its ‘Corporate Social Responsibility’ award.

‘Corporate Social Responsibility’ encompasses contributions towards energy efficiency, waste management and supporting the local community. A typical example of this is demonstrated in IKO Polymeric’s investment in Clay Cross, the site of a disused colliery in Chesterfield.

In an area struggling with industrial recession, IKO Polymeric has contributed towards the local economy by setting up an apprentice programme for young people.

The company has further demonstrated its involvement in the local community by voluntarily refurbishing the roof and interior of Boythorpe Community Centre, which was on the verge of closure due to insufficient maintenance funds.

A ‘Kidsafe Supporters Club’ was also set up by Derbyshire County Council and IKO Polymeric which funded road safety packs for 7 to 11 year olds.

Now in its 13th year, the Builder & Engineer Awards provides a platform to recognise the best products, projects, companies and individuals in the sector.

The awards will take place on 30th November 2016 at a black-tie ceremony at Anfield, the home of Liverpool Football Club. The event will be hosted by Liverpool-born actor Neil Fitzmaurice and will also feature a guest speaker in the form of former England international Sir Geoff Hurst MBE.