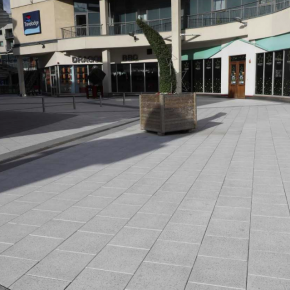 A number of systems from IKO PLC have featured in the extensive refurbishment of multi-use shopping destination Broadway Plaza in Birmingham.

In use 24 hours a day, the Plaza has suffered from major water ingress through the main deck, whilst the waterproofing system in the main plaza, walkways, balconies and car park were in poor condition.

An inspection by IKO revealed the original waterproofing in some places and screed was saturated with water, with no seal protecting the building.

Rio Asphalt used IKO Permascreed to lower the risk of gassing from the saturated screed, which was followed with the application of IKO Polimar FCS waterproofing throughout the plaza up to the brickwork and door thresholds.

The IKO Polimar FCS balcony and walkway system was used to treat exposed pedestrian areas, with some areas then backfilled using IKO enertherm XPS insulation board to raise the sections to the required level, followed by a geotextile membrane, aggregate, and finally paving.

The Plaza stayed open during the work, which was finished on time and within budget, with minimal disruption to shoppers and tenants.