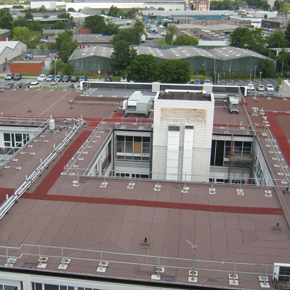 Wythenshawe Hospital, a major acute teaching hospital in the south of Manchester, has specified IKO PLC to develop a new roofing solution over 13,000m2.

The refurbishment included works to the Maternity Wing and several other areas of the hospital whilst the building remained in full operation.

It began with a detailed visual and physical survey of the roof, conducting using a Roofscan Infra-red survey which highlighted a series of issues.

Poor maintenance had meant that the original roof waterproofing had split and cracked, causing leaks.

Whilst short-term repairs had been carried out previously, the project required a complete  long-term replacement of the waterproofing and an improvement of the roof’s thermal performance

Ultra PrevENt incorporates Graphite Firewall Technology to act as a fire retardant which slows penetration of external fires and also forms a heat shield. This slows the spread of smoke and stops melted bitumen from dripping into the building.

Steve Bithell of IKO’s Approved Contractor Fulwood Roofing, comments: “It was interesting repairing and replacing the roof of an active Maternity Wing. The unit is in operation around the clock, so we had to schedule tasks such as removing and replacing the Georgian wired rooflights in quieter times. A fair amount of the work was done ‘out of hours’.

Refurbishing the ‘beehives’ heating vents was a challenge too. We completely dismantled them, raised the upstand to accommodate the tapered insulation, then rebuilt the sides and constructed a new roof onto which IKO’s system was installed. We then applied a maintenance free finish over the existing louvres”.

The hospital refurbishment improved the U-value to 0.18 W/m2k and was completed on time and in budget, giving the hospital a BBA approved system with a 20 year guarantee.