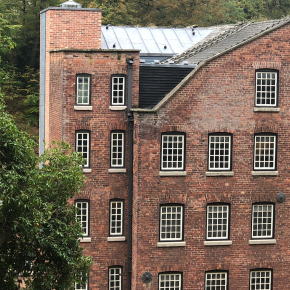 In November 2017 the mill was closed to allow refurbishment, including construction of a passenger lift to give access to the whole site for people with mobility issues. It re-opened to visitors in summer 2018.

It was essential that the project retained the authentic look of the mill. This is where Imperial Bricks came in, providing bricks for the new lift shaft to match the existing brickwork around the lift shaft area.

Brick matching is a service offered by Imperial that will compare colour, size, texture and weathering to produce an exact match.

Sales Manager Gary Dawber visited the site to record the colour and size of the old bricks. Gary comments: “I visited the site to photograph the existing brickwork, then had sample brick boards made up in various shades so the architect could select the best match. After careful matching, 8,000 3” Reclamation Handmade bricks with a bespoke weathered finish were supplied, It’s a rustic red multi-brick that’s particularly suited to old Cheshire buildings and has been a very popular choice for matching period properties across the North West. It was a very rewarding project. It’s a privilege to be able to contribute to the renovation and improvements of such a historic property.”

The Mill at Quarry Bank was closed during the building work but the rest of the properties on the site and the grounds remained open to the public. Access to the site is shared by the visiting public, staff and construction traffic so deliveries from Imperial Bricks had to carefully schedule deliveries to comply with robust health and safety requirements. During construction, the public was still admitted to the grounds and other buildings on the site, so their safety was a high priority.

Imperial Bricks works closely with contractors, planners and conservation officers to ensure the most suitable bricks are used in heritage projects. There is always a solution. Ask your local merchant for their regionally-appropriate handmade brick selection, and test panels for heritage projects can be delivered on-site.