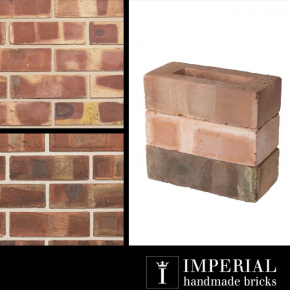 Imperial Bricks, the leading supplier of traditional handmade, pressed, waterstruck and wirecut bricks, has introduced a new range of Pre-War Common bricks with a difference.

Unique to the UK and available from Imperial Bricks, the bricks are ‘dual-faced’, with one ‘clean’ face/header, and one weathered, allowing builders to use either face, whether matching up to existing brickwork for RMI, using the ‘clean’ or weathered faces or create a blend of mixed finishes to add character.

Jason Hughes, MD at Imperial, referred to the Pre-War Common is as a ‘diverse brick’.

“It has one clean face and header, with the other side featuring tonal weathering for a natural appearance, so creating unique blends is within anyone’s reach,” he added.

“This means builders can use a single brick style that allows for different finishes. It’s a cost-effective solution that allows for more creativity and character but also less waste and easier storage, handling and transport.”

The dual-faced brick is available from a reliable, sustainable supply, in a standard metric size suitable for new build, restoration or refurbishment.

With a characteristic red and orange base, pale flashings and dark overburns, the Pre-War Common brick is hydraulically pressed and was a popular brick type for 19th and 20th century housing across North West England.

This new brick is one of over 50 shades and styles of bricks offered by Imperial.