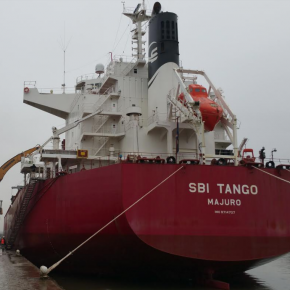 Impressive turnover and profits for S Norton & Co in 2017

Price increases for the main ferrous grades helped to push up turnover and profits by a third for S Norton & Co Ltd, one of the UK’s prominent metal recyclers, according to its latest published accounts for 2017.

In his financial report, John Norton, Chairman, said the upturn in market conditions, which commenced in 2016, continued throughout 2017.

He commented: “Despite some volatility along the way, dollar sales prices for the main ferrous grades finished the year more than 20% higher than they had started at.

“These price increases helped drive turnover up by a third, to over £272 million, and likewise operating profits rose significantly, from £16 million, to over £23 million.”

In addition, Mr Norton said that while the large foreign exchange gains of 2016 were ‘largely a result of the EU referendum decision’, this year’s movements still added in excess of £2 million to earnings, leaving profits before tax up by almost 7% from the previous year, at over £25 million.

This improved trading performance generated significant cash surpluses over the year, and allowed the group to settle all of its outstanding bank loans by the year end.

With caution, he said: “Although long-range forecasts anticipate ever-increasing demand for scrap products, uncertainty over the terms of Brexit will cast something of a cloud over the UK economy in the short run with the potential to impact on scrap arisings as a result.”

Given the state of the global economy will always have the biggest influence on the Group’s trading performance, Mr Norton warned current tensions around tariffs and ‘perceived protectionism’ could definitely have a ‘detrimental effect on demand should a full-blown trade war ensue’.

S Norton & Co’s 177 employees (up from 155 in 2016) were ‘acknowledged and appreciated’ by the directors for the ‘critical role’ they played in delivering these results.

Mr Norton added that grading structures were improved during the year, alongside targeted recruitment to boost the workforce.

As part of the Group’s strategic growth plan, several major investment projects have been identified in the short to medium term across their four sites in Liverpool, Manchester, Southampton and London.

Technical Director Matt Norton concluded: “As a family business, we take a long-term view. Our policy is to invest continually in good quality equipment to maintain our position at the forefront of the industry.”