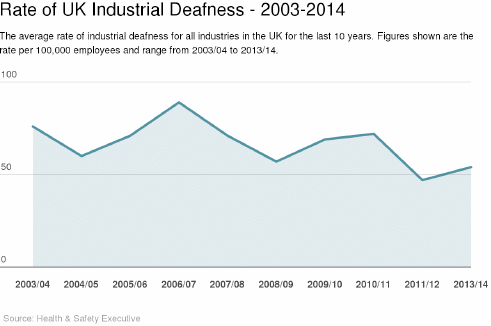 The figures show an increasing trend backed up by a year-on-year increase in compensation claims made by those suffering with the condition.

Figures obtained have shown a noticeable annual increase in the number of pay-outs as a result of industrial deafness cases brought forward to claims courts.

This Is Money obtained data from the Department of Energy and Climate Change looking specifically at pay-outs to those in the mining industry, where noise-induced hearing loss has historically been a problem.

The data shows numbers hitting a high of £3m in claims last year.

However, the trend seems to be showing an increase in the short term, with last year’s figures, showing a 14% rise in new cases from the previous year.

Hearing loss is a growing problem in the UK, and approximately 37% of all current cases can be attributed to those of working age.

Action on Hearing Loss predicts a 50% rise in deafness and hearing loss in the next 15 years.

A portion of this can be attributed to an increasing, ageing population as a result of higher life expectancies.

If short-term indications reverse long-term trends then occupational hearing loss could also be a key factor.