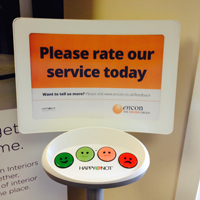 The scheme originally trialled at five of its branches after the New Year. Encon Group was so pleased with the HappyOrNot initiative it has since been extended to all 20 of its branches, with an exclusivity agreement making it the first in the industry to introduce this approach.

HappyOrNot asks customers feedback on their experience by hitting one of four smiley-face buttons.

The mechanism asks customers to quickly feedback their experience by hitting one of four smiley-face buttons coloured from green to red.

Designed to make customer satisfaction an easy KPI, monitoring software within the device sends reports and results to branch managers and group management via email and web portal.

This enables them to chart overall satisfaction levels and trends over time, allowing them to focus on where they are delivering great customer service and where it can be improved.

This level of best practice analysis enabled one of the trial branches to identify changes needed to shift patterns in the warehouse. The HappyOrNot monitoring had showed an increase in dissatisfaction around the time of the shift change but once this had been rectified, the ratings improved.

Nick Lankester, commercial development manager for the Encon Group, said: People rarely stop to fill out forms so the idea of just pressing a button appeals. This is a really positive step forward in showing our trade counter customers our appetite to be their distributor of choice and how much we value their feedback.